I have just been chatting with the reknown South African FIDE arbiter and organiser Gunther van den Bergh who has written his own pairing program using the FIDE-approved Dutch System about tie-breaks.

He echoes what I have always said that tie-break systems are not an exact science. In my estimate they are about 90% accurate. At end of tournament many parents were at pains to understand the Berger system of the pairing program Swissperfect in the round-robin option.

He was the Chief Arbiter in the All Africa Games in Maputo last year and here is what he writes:

Firstly, there is no perfect tiebreak system. All are flawed in some way.

If I have to use tie-breaks (for Individual Swiss tournaments). I use the following four systems (in the order listed with the first listed being the most important):

- Median Bucholz (a.k.a. Bucholz Cut).
This is the same as bucholz BUT deducting the highest and lowest opponent scores. This tries to correct for opponents who did not play all their games, etc.

- Median Bucholz 2
Same as above but deductin the two highest and two lowest opponent scores.

Depending on the size of the tournament. If the tournament is large (with many players) then use the above 3 systems. If there are few players in the tournament, then just use normal Bucholz (that is, no deductions are made as in Median Bucholz).

As mentioned, there is no perfect system - all systems are flawed. But, if you do decide to have tiebreaks, make sure that these (the tie-breaks to be used) are advertised (made known to the players) in advance (before the start of the tournament).

Posted by Unknown at 8:20 PM No comments: Links to this post

UGANDAN MASTERS PROVE THEIR WORTH


Candidate Master Patrick Kawuma was the biggest beneficiary from the last phase of the Olympiad Chess Qualifiers as he is destined to gain 41.4 points to improve on his current rating of 2168 to 2209. Similarly, another Candidate Master Bob Bibasa is set to gain 35.1, which will propel him from a rating of 2178 to 2213, making him the highest rated active Ugandan player.

The duo have strengthened their title credentials by catapulting themselves to the summit of the active rated player list ahead of veteran Grace Nsubuga (2197) and National Champion, Arthur Ssegwanyi (2178). 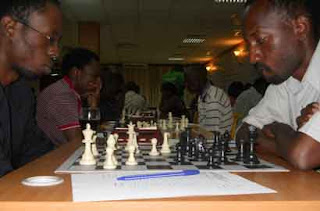 On the other hand, FM Elijah Emojong still has an uphill task awaiting him if he has to reduce the rating gap between him and the two CMs. Emojong had the third biggest gain from the Qualifiers (of 36 points), elevating him from 2110 to 2146, a rather dismal rating for an FM. He however deserves a pat on the back for the manner in which he disposed off the Olympiad team pretenders. It was a performance with credentials to validate the long standing adage of separation of boys from men.

Rwabushenyi Memorial Champ and probably East Africa’s favourite, Harold Wanyama made a rather paltry gain of 19.5 to elevate himself from 2139 to 2158. Wanyama’s small gain may be attributed to the uncharacteristic mature display in the Qualifiers which saw him play much longer games than he is popularly known for.
Ex Olympians Shadrack Kantinti and Kenneth Kakooza are set to lose 11.7 from 2133 to 2122 and 66 points from 2176 to 2110 respectively. The other big loser is the most recent entrant on the FIDE rating list, Farouk Fauza who is set to lose a whooping 76 points from 2178 to 2002. Details of the upcoming changes are already on the FIDE website.

The Qualifiers Chief Arbiter, FA Stephen Kisuze attributes the disparities in the losses and gains to ill preparedness on the part of most participants and lack of strategy. According to him, a good strategy entails aiming at qualification plus rating points gain through avoiding losses to weaker opponents.

Posted by Unknown at 7:15 PM No comments: Links to this post


Posted by Unknown at 10:44 AM No comments: Links to this post


Posted by Unknown at 1:41 AM No comments: Links to this post